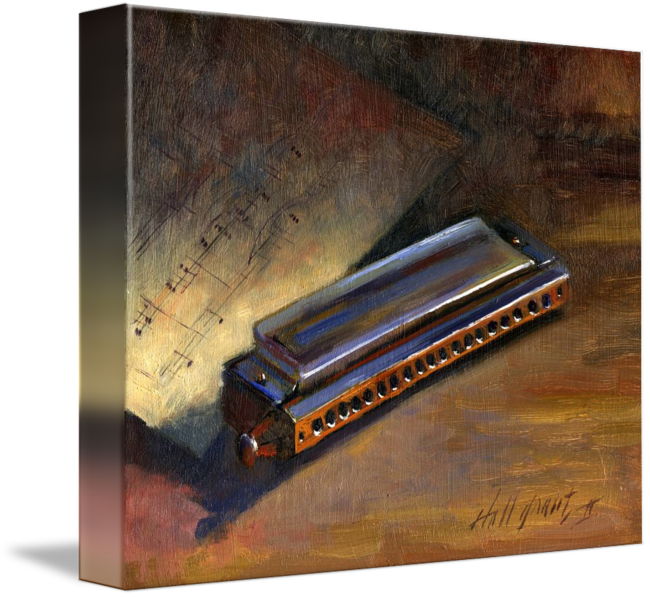 Availablity Usually ships within five business days.
Artist Hall Groat II
Collection NewYorkArtCollection
Description Painted in a 19th century traditional style, thisstunning realistic work is of a harmonica. The original waspainted in oil on a 8' x 10' prepared panel. It's painted romantically in brilliant golds, reds, yellows and blues. The harmonica belongs to the artist's father who enjoys performing in public spaces. The painting has been photographed in natural light, and adjusted to appear as close as possible to the original.

In 1993 Groat received the National Endowment For The Arts grant for a solo exhibition at Washington and Jefferson College. Groat is included in numerous private and public collections both nationally and abroad. These include actors, Michael Douglas and Catherine Zeta Jones, the Ackerley Corporation, Bristol-Myers Squibb, Cellular One, Sheraton Hotel Corporation, Binghamton University, Everson Museum of Art, Munson-Williams Proctor Institute of Art, The State University of New York system, Roberson Museum and Science Center and Washington Jefferson College.

In 2006 he was involved in a solo exhibition at the Roberson Museum entitled, Contiguous Forms. Featured in the insightful museum catalogue published in conjunction with this exhibition is a brilliant essay written by Gerard Haggerty, entitled "It's About Time." Gerard Haggerty is a regular contributor to ARTnews. His writing has also appeared in Art in America, Arts, Artweek and many other journals and he has written numerous monographs for museums and galleries, here and abroad.