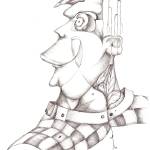 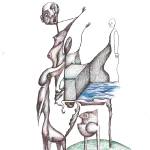 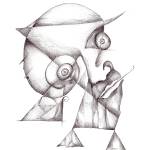 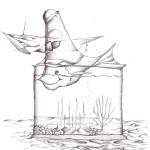 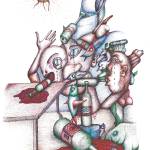 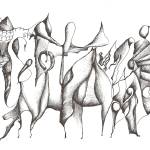 
Observing the workings of psyche.
Peeking into the mind.
Feeling my way through the darkness.
Chasing the dimmest of lights.

Digging deeper and deeper
In order to understand “the self”.
It is a bottomless pit, dammit!
There’s no end to the depth.

Uncovering the ancient truths.
Discovering brand new paths.
Is there a point to this adventure?
Who’s to decide?!

When I was 16 (in 1997) I had to leave Ukraine, where I was born and grew up, and to immigrate to Israel as a student. It turned out to be a permanent move in the end. The detachment from family, loss of friends and the culture shock of the unfamiliar environment, proved to be quite a challenge.

I was somewhat involved in arts before, but in those days art became an integral part of my life, a tool for mentally dealing with life challenges and for processing emotional struggles. I could probably say that my art career was born out of pain.

Since those difficult times, my art grew into something else, a tool to understand “the self”, to learn the workings of the mind.

Currently, after the second immigration in 2007, I live and work in Vancouver, Canada.