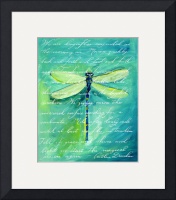 Availablity Usually ships within five business days.
Artist Caitlin Dundon
Collection CaitlinDundon
Description Beautifully dreamy blue/green painting of a delicate dragonfly with elegant script of the artist's own original text: We are dragonflies suspended in the morning air. Moving quickly back and forth and back and forth again. Transformed from our youth we rise above the shallow lake, shimmering too much in the dappled sunshine. We zigzag across the mirrored surface searching for a soul mate. Mile after lonely mile until at last we fly in tandem. Full of grace and shine and light we start the magical process again. - Caitlin Dundon
Add to Cart
Popular Configurations 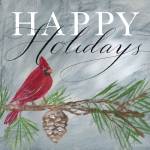 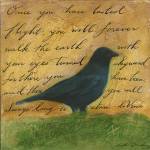 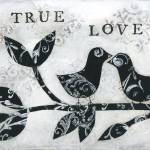 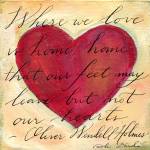 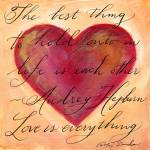 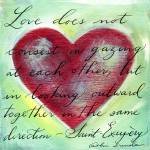 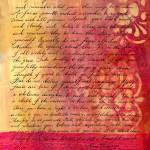 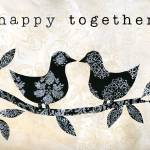 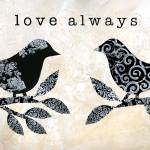 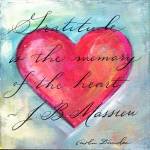 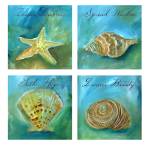 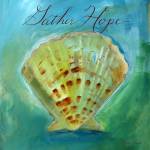 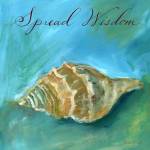 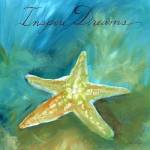 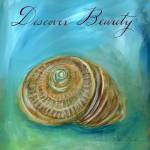 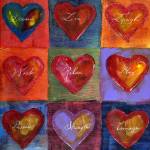 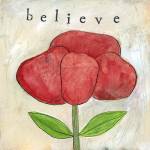 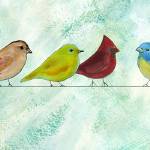 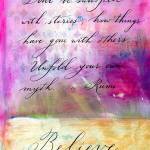 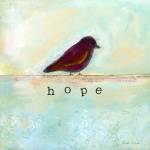 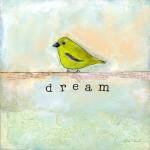 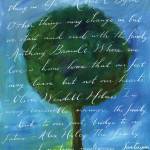 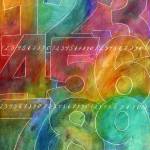 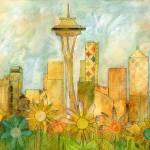 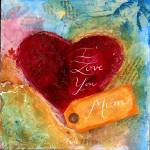 Caitlin Dundon, Seattle
Member Since January 2010
Artist Statement Seattle artist Caitlin Dundon is known for her trademark handwritten script and colorful mixed media paintings. She is a professional calligrapher and instructor in both mixed media collage and pointed pen calligraphy. She has taught mixed media techniques and calligraphy workshops at various conferences and retreats across the US and Canada including: West Coast Calligraphy Society, Letters of Joy, Art is You, Art Unraveled, Art and Soul and Denver Artmakers.

Dundon’s work has appeared in Letter Arts Magazine, Seattle Magazine, Seattle Business Monthly, Seattle Bride, Manhattan Bride and The Frye Art Museum. She has been featured on television on an episode of The Style Fyle, with Kerry Damiano reporting, Seattle Channel’s City-A-Go-Go, with Nancy Guppy reporting, and mentioned in the Washington Post.

She has been featured in Somerset Studio magazine’s Lively Art of Lettering as well as writing regularly for Somerset Studio. She has also been a guest artist blogger in Somerset’s newest online presence, Somerset Place.

Born in Rochester, New York in 1967, Dundon graduated from Syracuse University with a BFA in Communication Design. She moved to Seattle in 1989 and worked as a graphic designer and production manager before starting her own company in 1996, creating one-of-a-kind handscripted keepsake boxes under the name One Heart Studio. After working with customers and craft gallery buyers directly for over ten years, she started to license her art in 2003 through Sagebrush Fine Art changing her company name to Handwritten Life. Dundon’s art has been published as posters, greeting cards, plaques, wall tiles, journals cotton throws and fabric – some featuring the artist’s own original text. She is currently a licensed artist represented by Roaring Brook Art Company.

Dundon is also a published children’s book author. The Yellow Umbrella, illustrated by Sandra Speidel (Simon & Schuster, 1994) was named Pick of the Lists by the American Bookseller’s Association.

Her studio is located in Seattle, Washington where she lives with her husband, Randy Woods.
Read More
Community
Comments
Catalog Details