Availablity Usually ships within five business days.
Artist Stefanie Posavec
Collection matte_posters
Description This poster depicts a meandering line that represents the entirety of On the Road, by Jack Kerouac. Every sentence in the novel is represented: each sentence is represented by a line which is scaled to the number of words within it. After each sentence, the line takes a right turn, which generates an 'Etch-a-Sketch' type of drawing. All of the sentences are colour-coded according to key themes within the novel. The colours were gathered from car paint swatcheds from the 1940s. ***THIS POSTER MUST BE PRINTED AT 'Grande' SIZE OR YOU WILL BE DISAPPOINTED!***
Add to Cart
Popular Configurations 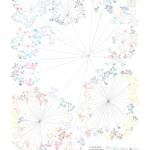 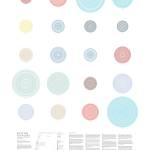 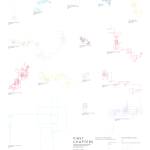 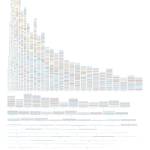 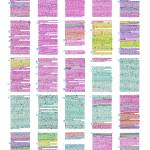 Stefanie Posavec, London
Member Since October 2008
Artist Statement 'Writing Without Words' was the project I completed for my final year on the MA Communication Design course at Central Saint Martins College of Art and Design, London. I wanted to find a way of communicating the complexity found in literature as well as highlight the similarities and differences in the writing styles of various authors.The structure of a novel and its punctuation, parts of speech, and words per sentence were used to generate the final complex patterns. Any piece of literature can be visualised using these approaches, but the focus of the project was the novel On the Road, by Jack Kerouac, because of its importance to Stefanie while growing up in Denver, Colorado – a key city within the novel.

I was born in Loveland, Colorado in 1981 and raised in Denver, Colorado, where analysing the grammatical structure of sentences in high school English class proved more influential than I ever imagined. After moving back and forth between Denver and London, I moved to London permanently in 2004. I hold a BFA from Colorado State University in Fort Collins, Colorado (2002), and an MA in Communication Design from Central Saint Martins College of Art and Design in London, England (2006). While pursuing personal projects and exhibitions in my spare time, my full-time job involves working with literature, but in a different way: I work as a book cover designer in London.
Read More
Community
Comments
Catalog Details